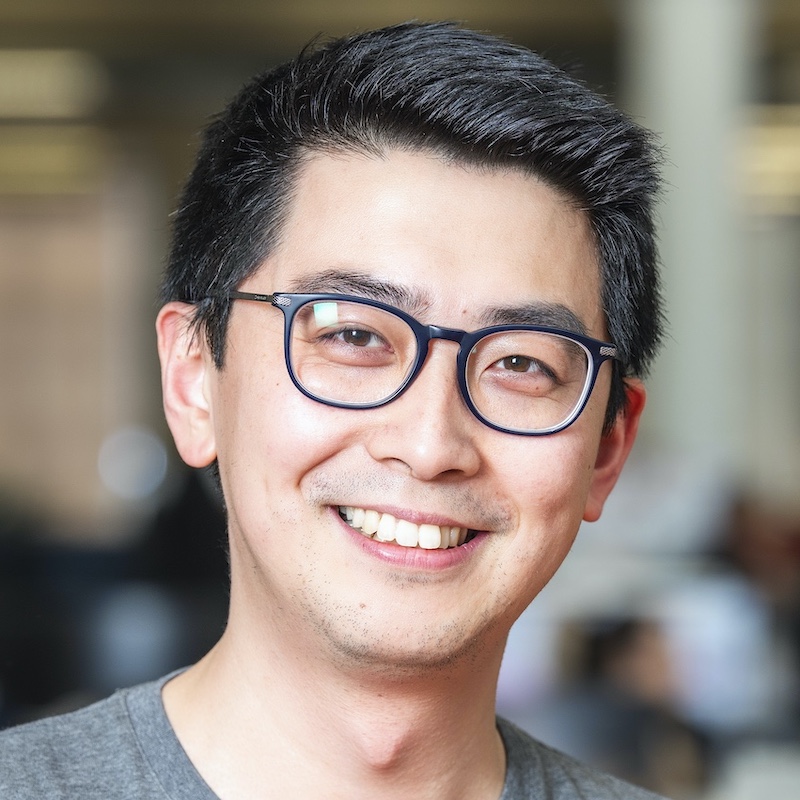 Thumbnails in iOS and LinkPresentation

One of the biggest challenges in developing Hackers is generating and fetching thumbnails for each post. The early versions didn’t have a thumbnail, but scrolling through a long list of posts without a visual indicator meant it was really easy to lose your position. Adding a thumbnail image really helped with spatial awareness.

But neither the Hacker News API nor website have thumbnails for posts, only text links. I had to find another way.

The first implementation in Hackers fetched each post body in the list. With the raw HTML, it would then scour the HTML for images that looked like they could be thumbnails. Once it found the one it wanted, it would then fetch the image, resize it, and display it in the cell. This would have to be done for each and every post in the list, of which 30 loaded at a time. Obviously this was incredibly slow, and taxing on your iPhone’s CPU and data connection.

My algorithm for parsing HTML for images wasn’t particularly efficient either, and in the days of the iPhone 5S and 6, the app would sometimes struggle to get 60 FPS scrolling, especially when the images it picked turned out to be large and the resizing would start to bottleneck.

There were some advantages to this approach, it was all done on the device so no server side component to host or manage. But the cost was probably too much work for a mobile device, and complex asynchronous code that would have to chain together multiple network requests, and a synchronous queue to conditionally update cells that could potentially (and probably likely) to have already gone off screen.

I never really liked this, but honestly felt too invested in the monster I had created to let it go. I had several attempts at making it more efficient, introduction better local caching of thumbnails, and request cancellation if the cell disappeared off screen. But they didn’t fix the fundamental problems with the approach, and just made the code even more complicated. It was time for a rethink.

My second attempt would borrow from an old idea in Hackers. Even older versions of Hackers used an orchestration API I hosted on Heroku that converted the Hacker News website HTML into JSON response. I eventually moved this to in-app as the performance hit was negligible and would enable authentication and voting features in the future.

However thumbnail fetching would be much easier if I created an API that took a URL as a parameter, and it did the fetching of the HTML body, parsing it, and returning a 301 redirect response to the image. This considerably reduced the work in-app, and made thumbnails faster and easier to fetch. A simple stateless API is much easier to scale on cloud infrastructure, so I created a simple Node.js service, and hosted on the Zeit Now platform on their free tier. I really felt much happier about this approach I’d offloaded the appropriate work to a server side component while still keeping the core functionality working in-app. I could also remove a whole heap of code that I was never liked and hated changing.

Why haven’t I thought of this before

But a pretty big problem still remained: the images it fetched were more often than not way too large to be a thumbnail and but I still had to download the whole image (sometimes several megabytes), and then resize and crop it into a thumbnail to display.

And of course, there are already several packages on npm that do just that. So Hackers now displays better thumbnail images that are much smaller in size, and the best part was I didn’t even need to ship an update to Hackers to do it, it was just a change to the API. 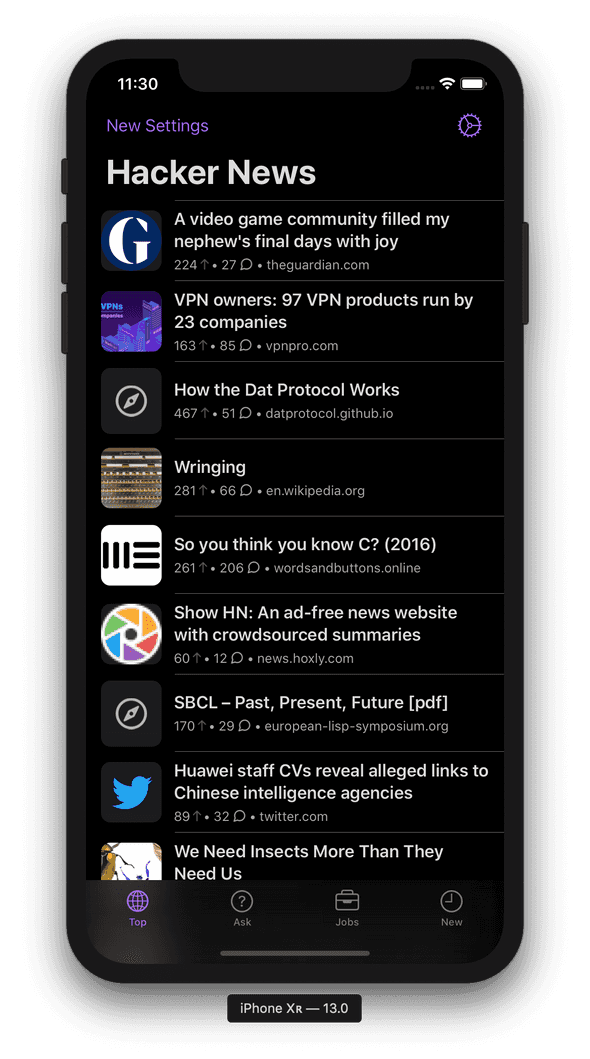 Robbie Trencheny pointed me to a new Apple framework quietly released at WWDC called LinkPresentation. The official documentation is sparse, but Apple released a WWDC session video explaining the basics.

This is the same framework that Messages.app uses to show link previews. Swinjective-C has a good summary, but essentially everything is wrapped in LPMetadataProvider which does all the heavy lifting for you:

Does this mean I can actually remove my custom thumbnail fetch from Hackers? I wanted to experiment so I created a branch for a proof of concept. In doing so I discovered that when you call startFetchingMetadata, it actually creates a WKWebView in the background to fetch and parse the whole URL. This adds a huge amount of overhead just to get a thumbnail, and is by far the most inefficient method I’ve tried in Hackers. LPMetadata conforms to NSSecureCoding so I added caching, but this only helped for subsequent requests. Just initiating around 10 requests at once for a single display’s worth of thumbnails would grind the app to a halt. It doesn’t help that you have to use LPMetadataProvider on the main thread, as its unable to instantiate a WKWebView on a background thread.

Unfortunately while LPMetadata sounds good in theory, Apple’s implementation is geared much more towards rich previews and not just fetching thumbnails. In its current state there’s no way I can use it in Hackers.

While I’m happy with the current way of fetching thumbnails in Hackers, there is still a final optimisation I have in mind. The API is completely stateless, which means it has to fetch and parse every URL requested even if it has processed the same URL before. A simple cache or CDN in front of it could make it even faster. But first I want to focus on getting the iOS 13 update ready.

I just shipped biggest updates to Hackers since 2017: 4.0. A lot of changes come with this new versions, some highlights include: 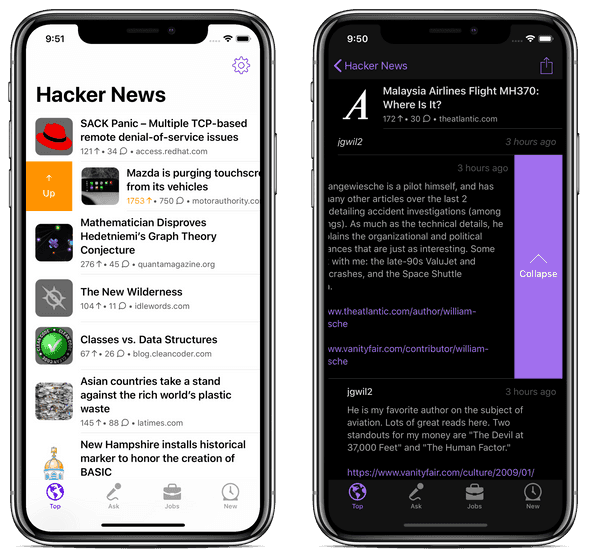 I put in a big effort in the past couple months to tidy up the code base ready for iOS 13. If you didn’t know, Hackers is an open source project. You can see all the Issues and Pull Requests that went into this update in the 4.0 Milestone, and if you want to get your hands dirty, there are a few easy to pick up features in the list.

Hackers has reached an interesting place; it has been the top result when you search for “Hacker News” on the App Store for a while. It’s the most popular it’s ever been, even though there are dozens of competing apps. I think one of the reasons Hackers has risen to the top of the pile is my persistance since 2013. There was a period between 2014-15 that I experimented with paid pricing, ranging from 99p to £2.99, and there was a small chance than it could make me a small amount of recurring revenue. But I was never really happy with charging people to use a pet project, and I had wasn’t deluded enough to think that an iOS Hacker News app could do any more than fill a niche.

Since 2016 I’ve tried to update it regularly, adding support for new iOS versions, iPad support, making each interaction with the app slicker with every release. It’s also a exercise book for my own programming skills, something I use to keep my tools sharpened.

I want to thank the people who’ve taken the time to contribute to the app, and also to all the users who left a review or sent me a kind message. It’s really appreciated.

Here’s to the next six years.

Iconfactory just released their latest update to the oldest Twitter app around: Twitterrific. I talked a bit about Twitterrific in my last…

I thought Twitter was the new blogging, but I was wrong

It’s been many years since I regularly wrote a blog, in fact since 2014 my longest piece of writing is probably an email. This sobering…

Most of my side projects are destined for obscurity, and not many even make it to the lofty heights where I would write a blog post about it…

Moving from Squarespace to Gatsby

I’ve used Squarespace as the host for this website since 2012, and I really enjoyed trading small monthly fee for never having to worry…

Watch It Later for Apple TV

I had some time off over Christmas, so I decided to scratch an itch I’ve had for a while now. Instapaper has been my go to place to save…

Speculation about the next GPU in the iMac

Tomorrow is Apple’s big iPhone event day, with a dash of Apple Watch and software thrown in. However Mark Gurman reports no new Macs at this…

It wasn’t long ago that travelling on a trip longer than two weeks meant lumbering a laptop with you the whole way. I’ve just recently…

Every year I tell myself I don’t do New Years Resolutions, they have a tendency to set one up for failure or have goals that are so benign…

Because Open is Always Better →

Google are doing some questionable things with new TLDs, and the Internet is letting them get away with it: My point is that if you think…

I like this new advert. It’s another peek of Apple’s transition into a post-Steve era. You can almost hear the cries of “Steve would never…